The Imperial Health Charity flag was flown from the highest peak in Wales at the weekend as a team of dedicated fundraisers reached the summit of Mount Snowdon to raise money for renal services.

Aiden Walsh and his sister Sharon Blackstone organised the ‘Climb for Mattie’ in memory of their father who died shortly before Christmas last year.

He had been on dialysis for kidney failure for several months and was preparing for a life-saving transplant at Hammersmith Hospital.

But sadly - soon after Aiden had been confirmed as a suitable donor - his father suffered a fatal heart attack.

To celebrate their father’s life and raise money for the hospital that fought to save him, Aiden and Sharon rallied their friends and family to tackle the climb in north Wales on Saturday 19 May.

The group of 11 fundraisers reached the summit in around three-and-a-half hours after taking the Llanberis route all the way to the top.

Thanks to their efforts, the team have so far raised over £3,400 for Imperial Health Charity, which supports Hammersmith and the other four hospitals of the Imperial College Healthcare NHS Trust.

“It’s been really challenging but a great achievement - and to do it with all our friends and family has been really enjoyable,” said Aiden, after reaching the summit.

“Our dad was looked after by the team at Hammersmith so well and we decided we wanted to do something positive in his memory.”

The ‘Climb For Mattie’ team set off at around 11am and reached the summit just after 2pm before heading back down the Miners path to complete the challenge at around 6pm.

Aiden said he was delighted that so many friends and family had joined them for the climb and that the proceeds would be going straight back to the hospital where his father was treated.

The money will be split between two of the charity’s funds – The Kidney Fund and The Renal Research Fund – which both support renal services at Hammersmith.

Aiden added: “The doctors, the staff and the NHS in general are such an amazing organisation, so we chose to raise money to directly help the ward he was on, to help improve their facilities, and also to help improve patient care as well.

“I can’t thank the nurses and the doctors highly enough for all they did for him while he was there. He was looked after amazingly well.

“As a family, we can’t speak highly enough of the care, the professionalism and the attention that the staff provided for our dad. It’s a real testament to the NHS. That’s why we wanted to support a charity that puts money directly back into the health service.”

To find out more about fundraising opportunities at Imperial Health Charity, visit www.imperialcharity.org.uk/fundraising-events 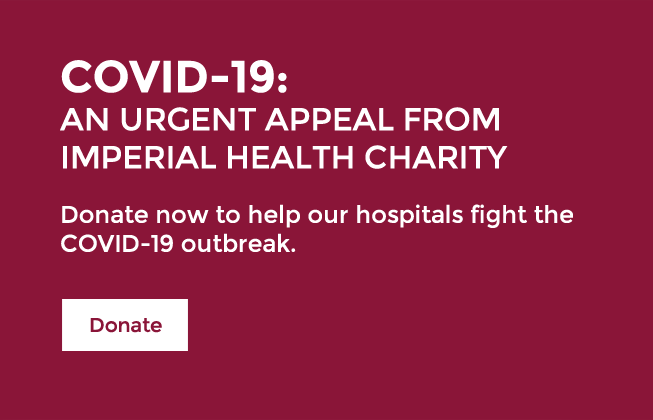